Cut Out the Plastic

After a successful trial, I’m pleased to announce that Monitair will no longer be using plastic packaging for delivery of Chevron orders. 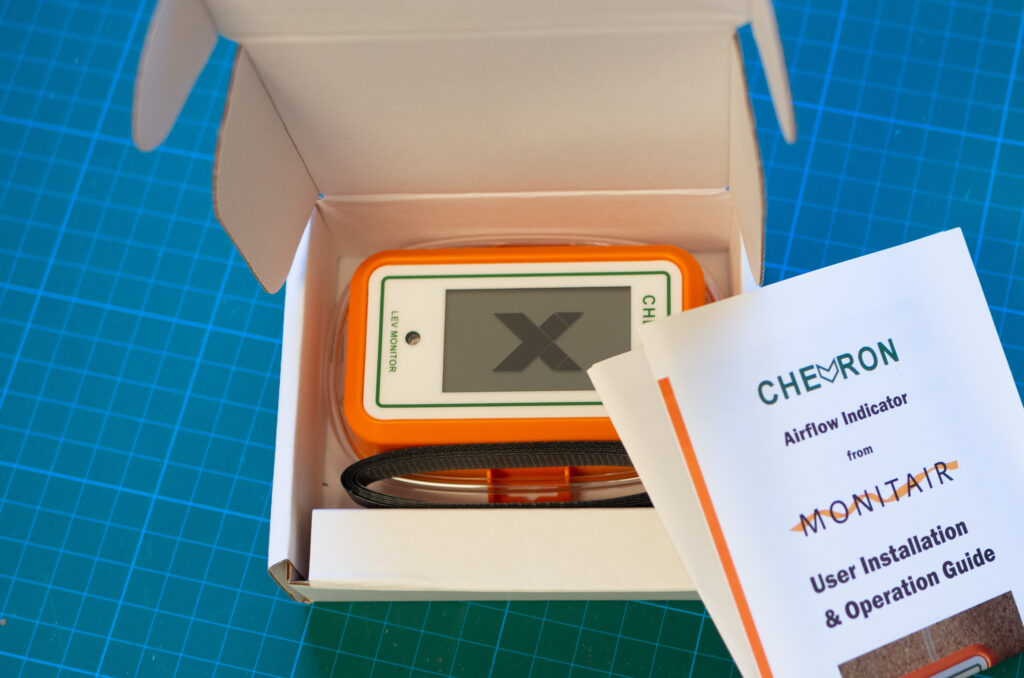 LEV systems do their part in improving the environment, by removing hazardous substances from the breathing space of vulnerable employees. 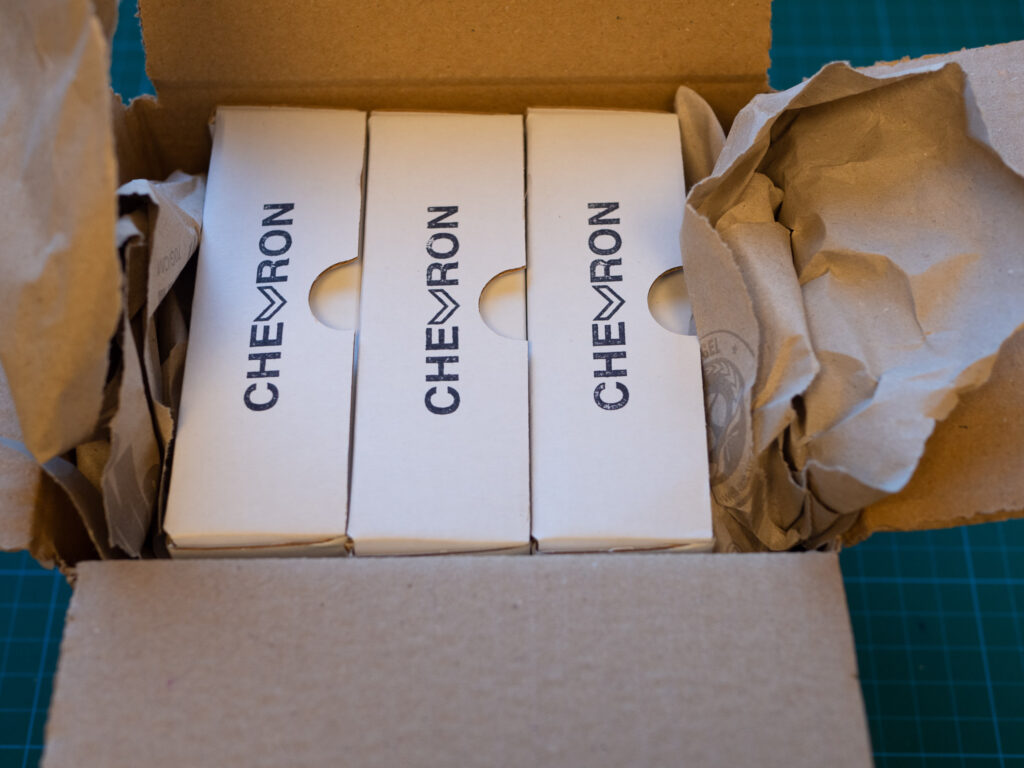 We should also do our part in improving the environment of the Earth in general, by reducing or eradicating the use of unnecessary single-use plastics in packaging and food presentation.

It is easy to do – and every little helps.

I wish I could get my suppliers to follow suit.

The Monitair Chevron airflow indicator uses a low-power electronic microcontroller and custom display hardware to automatically monitor the efficiency of LEV systems. This is achieved by measuring the static pressure in the extract duct, which is indicative of the transport velocity in that duct. This usually entails positioning the Chevron’s sampling point as close to the point of air intake as possible, with no restrictions to airflow before this point. When the above configuration is used, with the sampling point at A, any downstream impediment to safe extraction can be detected using just one alarm criterion – that a drop in duct suction (or an increase from the calibrated negative static pressure) will indicate one or more system faults. These could include a blockage, a leaking joint, a closed blast-gate or a drop in fan capacity, to name but a few.

This simple model of an LEV system is indicative of the majority of systems in use in industrial envronments today, but there are variations from this.

One of the most common variations is the spray booth. Most spray booths comprise a contained, or semi-contained area, often with flexible curtains through which operators enter or leave the booth. One common configuration involves the use of pleated filters mounted in the wall of the booth, with a plenum behind, which has an extract fan mounted directly onto it. Since the static pressure in the booth is very low – in the order of tens of Pascals at most – the only sensible place to sample the pressure is behind the filter in the plenum. This causes a problem when the above single alarm criterion is used, because as the filter gets blocked, the negative pressure in the plenum increases, which would normally be interpreted as a good condition, so a blocked filter will not result in an alarm.

As it became apparent that Chevrons could be used in spray booths, a second mode of operation has been added to the device’s software – a ‘dual alarm’ mode. This mode adds another criterion to the ‘low pressure’ situation described above. This second criterion has an additional ‘high pressure’ fail mode. If the negative static pressure rises to 50% above the calibration point, this is interpreted as a ‘filter blocked’ mode, and the moving chevron changes to a cross flashing at approximately twice the rate of the ‘low pressure’ rate.

All Chevrons with a serial number greater than 1248 ( June 2016) can be configured as ‘dual alarm’ units.

If you believe the Chevron is intended to be used in a spray booth or similar type of configuration, please let us know when you place your order, and the ‘dual mode’ configuration will be set before dispatch. If you already have Chevrons which you would like to use in this configuration, you can re-configure your unit(s) fairly easily. This note is included with new units.

A second enhancement has been implemented in Chevrons from July 2017 (Ser No 2778 onward) that improves battery life. This mod introduces a low-power mode, which does not flash the LED or take any measurements until the unit is calibrated for the first time. Whilst in this low-power mode, the current consumption is less than 35uA – so the unit could run like this for over 6 years. The reason behind this mode is to reduce the battery draw before the unit is used in anger. Sometimes Chevrons are kept in store before they can be installed, and the low power mode means that the effect on battery life will be greatly reduced.

The Chevron is an evolving product and, if there are further enhancements you would like to see, please email me at graham@monitair.co.uk

Thank you for your continued interest in the Monitair Chevron

The HSE can often be perceived as rather vague about whether airflow indicators should or must be fitted to LEV systems.

Is it a recommendation or a stipulation?

Many of you may know Bill Cassells. Bill has over 30 years experience in Industrial Ventilation both with HSE and as a private consultant. He owns the LEV training company Oxly8, and is widely regarded as one of the foremost authorities on the design, management and testing of Industrial Ventilation systems. He teaches the full range of BOHS P600 LEV courses, and also acts as an engineering Expert Witness for the UK Courts in cases relating to occupational respiratory diseases.

In this comprehensive article on his website oxyl8.com Bill discusses the use of airflow indicators to put their use into perspective, not only as a recommendation of HSG 258, but also as a means of complying with the broader legal requirements of COSHH.

Bill goes into some depth to fully explain the subject so you may want to make yourself a cup of tea before you start!

When Peter Dunn of Enersys was advised by the HSE that all LEV exhaust points should be checked on a monthly basis, he realised that this would involve unacceptable levels of time and manpower, and that fitting airflow indicators would offer a better and more easily reportable alternative. Click HERE to see why he chose the Monitair Chevron.

Dawson Construction Plant Ltd is one of the world’s leading suppliers of Piling Equipment with over 40 years’ experience of designing, developing and manufacturing in the UK

Bob Hadden is Workshop Supervisor at Dawson, and he said –

‘Our manufacturing plant in Milton Keynes produces a wholly British made product for a global market. To meet requirements to monitor the LEV’s used in our welding & spray shops we use Monitair Chevron airflow indicators. They are easy to install & set up requiring no external electrical supply. The display is straight forward & easy to understand, especially by staff whose first language is not English’.

Imperial College London is a world-class learning and research centre and is consistently included among the world’s best universities. They take safety very seriously and have a full-time department to provide a safe working environment for all staff, students and visitors

Ian Smith, a Health & Safety Technician at Imperial College gave this impression of the Monitair Chevron –

“We trialled a few Chevron units on a selection of some of our LEV and found the units to be really easy to use, set up, install and also robust in every situation so far.

We have increased the number of units purchased and are looking to place many more orders to cover new and existing systems across the College.

So far the units have been placed on welding hoods, solder hoods and various chemical evaporation hoods of differing sizes and all work well and as expected.

Guernsey Electricity needed to demonstrate that their LEV’s were operating effectively and efficiently, and asked Monitair to supply them with Chevron airflow indicators.

“We fitted units to two of our local exhaust ventilation systems, and are very happy with them. They were delivered quickly, were simple to install and calibrate and provided a very cost efficient means of monitoring the systems.
We recently had a visit from our contacts at Guernsey Fire and Rescue, who came down to look at the Chevron units and I believe they have now ordered a number of the monitors for their own vehicle systems.
All in all, very happy with the product!”

Babcock International, operating in Devonport Royal Dockyard, has an ongoing responsibility for the maintenance of Royal Navy vessels. This often involves operating in confined spaces and requires the use of portable, temporary Local Exhaust Ventilation connected to remote fans by flexible ducting. These LEVs need to be continuously monitored to ensure they are working correctly. Babcock have found that the Chevron gives them a convenient means of doing this with a minimum of set-up time and a highly visible display to show, with just a glance, that the system is doing what it should.

One user said ‘We had been looking for something like this for ages. It solves the problems we had. It is small, light and battery powered, so it doesn’t need wiring in. We can see that the extract, from a hazardous area, is working properly without needing to go into that area.’